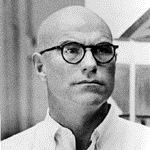 Emilio Sanchez was born in Camagüey, Cuba. He began his artistic training at the Art Students League in 1944 when he moved to New York City where he lived until he died. However, it was in Cuba that he became fascinated with the play of light and shadow on colored forms that became a dominant characteristic of his works. His early works of the 1950s are stylized and figurative depicting themes such as portraits of friends and models, views of New York and tropical landscapes.

In the 1960s his works became significantly more abstract, though always maintaining a strong sense of naturalism. It is during this decade that his work matured into an individual vision and when he began to develop his well-known paintings of houses and architectural themes. These architectural works stand out for their simplified forms where all superfluous details are eliminated. Stripped down to their essence these structures acquire universal meaning. Here he captured the effect of light on color making it vibrant. Despite the fact that his buildings are often devoid of visible inhabitants, they hold a strong living presence of their own.

Throughout the 1970s and 1980s he further explored architectural themes by traveling to countries around the Mediterranean. For example in Morocco he was impressed by the stark white vernacular buildings. He also produced streamlined geometric views of New York skyscrapers. These architectural works probably come closest to the works of Edward Hopper, Georgia O’Keeffe and Charles Sheeler in their abstracted stillness of the built environment. In addition to the architectural works Sanchez explored a variety of themes selected for their strong compositional value such as still lifes of fruits and flowers, sailboats, clotheslines and sunsets over the Hudson River. Different from his linear renderings of buildings these other works demonstrate his versatility in painting looser amorphous forms. In the 1990s Sanchez’s attention focused more on New York urban scenes of storefronts, garages and skyscrapers.

An artist with an independent voice and international acclaim, Sanchez has had over sixty solo exhibitions and has been included in numerous group shows in museums and galleries in the United States, Latin America and Europe. His art is well represented in private and public collections including over thirty museums like the New York Museum of Modern Art, the Metropolitan Museum and the Philadelphia Museum of Art. He has also received prestigious awards as first prize at the 1974 Biennial in San Juan, Puerto Rico.