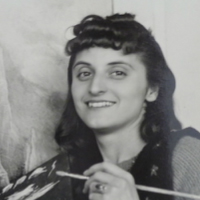 Ethel Magafan was born in Chicago, Illinois. Raised in Colorado Springs, Colorado, she studied at the Colorado Springs Fine Arts Center with Frank Mechau, Boardman Robinson, and Peppino Mangravite, and was a member of the Colorado Springs Fine Arts Center. Ethel and her twin sister, Jenne, became widely known for their murals painted during the Depression. In the 1930s, Ethel received her first of seven Government commissions when she was commissioned to produce a painting for the U.S. Post Office in Auburn, Nebraska. Other paintings commissioned by the U.S. Government hang in the U.S. Senate Chamber, the Social Security Building, and the Recorder Deeds Building in Washington D.C., and in U.S. Post Offices in Wynne, Arkansas; Mudill, Oklahoma; and Denver, Colorado.