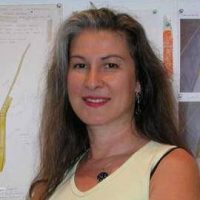 Eve Andrée Laramée makes sculptures, installations and works on paper dealing with the complex triadic relationship between art, science and nature. She was born in Los Angeles, who divides her time between Brooklyn, NY, Baltimore, MD and Santa Fe, NM. Her sculptures, installations and works on paper have been exhibited throughout the United States, Europe and Asia, including exhibitions in New York, England, Germany, Italy, Switzerland, France, Holland, Israel, China, Japan, Poland and the Czech Republic. Her work has been exhibited at the Venice Biennale, Mass MOCA, the Museum of Contemporary Art, Chicago; the New Museum of Contemporary Art, New York; the High Museum of Art, Atlanta; the Contemporary Arts Museum, Houston; among other institutions. Her work is included in the collections of the MacArthur Foundation, the Museum of Modern Art, New York, the Museum of Contemporary Art, Chicago, The Fogg Art Museum of Harvard University, the UCLA Armand Hammer Museum, and in numerous other public and private collections.

She was recently commissioned to create a work in the public realm dealing with desertification and soil degradation for the “Weather Report: Art and Climate Change,” curated by Lucy Lippard, at the Boulder Museum of Contemporary Art. Another recent project was a visual musical score, “Misplaced Data,” based on gravity anomalies that was performed last year by musical ensembles in Shanghai, China and Hamburg, Germany. Current projects include an installation and book about the transformation of the Salton Sea/Mojave Desert during the Cold War, and a project on water resources in Northern New Mexico contaminated by radioactive isotopes. She has been commissioned to create two new one-person installations in the Spring of 2009 at the Museum of the American Philosophical Society, Philadelphia, in response to Charles Darwin’s work; and at the Emory University Art Gallery on the future of evolution.

She teaches in the Interdisciplinary Sculpture Department at the Maryland Institute College of Art, and previously taught sculpture and critical theory at The Cooper Union for the Advancement of Art and Science, Massachusetts Institute of Technology, the Rhode Island School of Design, Sarah Lawrence College, New York University, and Fairfield University.