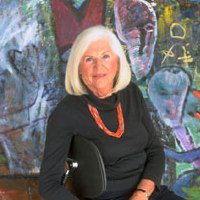 Putterman, who was awarded a National Endowment Grant in 1979, has been featured in many solo and group exhibitions in the United States and Europe. Her works have received numerous awards and accolades including the Distinguished Alumni Award from Pennsylvania State University. Her painting and prints can be seen in many museum and corporate collections including: Metropolitan Museum of Art and Brooklyn Museum, New York; Chicago Art Institute, Chicago; and Jacksonville Museum, Polk Museum, and Gulf Coast Museum in Florida. Putterman is listed in Who’s Who in American Art, Who’s Who in American Women, and Who’s Who in America.