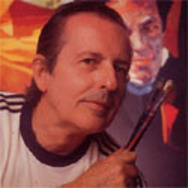 In 1963, the Puerto Rican painter Francisco Rodon began his series of works on Argentinian writer Jorges Luis Borges, who said, “It’s the best portrait ever painted of me.” Lest Rodon become too flattered, Borges added, “It’s the only one so far.” Rodon began to make art at age nine, when he sketched the actress Maria Felix after seeing one of her films. He went on to acquire an international education in the arts and began to paint celebrities in the late ’50s. Mainly acclaimed as a portrait painter, Rodon dissects his sitters with a penetrating precision, revealing hidden terrors and torments as well as passions and exaltations. Said critic Marta Traba, “He paints living creatures as if he were challenging death, and the dead as if they were to live again.” In his portraits, the work of art as a form and a creation of the painter presides over the subject’s personality. As a “monumental” painter, he strikes a balance between the universal and the particular and ends up with images that are like iconic effigies. Color in Rodon’s work functions like an “autonomous entity” playing a “fascinating prismatic game.” It played an important role in the creation of his 1970 series, “The Personages.” The subjects of these paintings come from the world of politics, the arts, and Puerto Rican contemporary mythology. He has painted Luis Munoz-Marin, Alicia Alonso, Juan Rulfo, Mario Vargas-Llosa, and Marta Traba, among others.