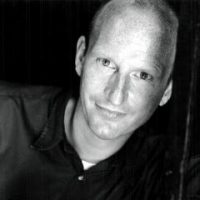 Born in New York, Frank Moore grew up on Long Island and spent his summers with his family in the Adirondacks. From his earliest youth, he had a strong interest in the natural world.

Moore attended Yale College, and spent a year in Paris at the Cite des Arts. He moved to the SoHo area of Manhattan in 1977. In addition to creating paintings and drawings, he designed sets and costumes and collaborated with several major choreographers and ballet companies. He formed a long-term partnership with choreographer and dancer Jim Self with whom he created the film Beehive in 1985, which was expanded into a ballet commissioned by the Boston Ballet in 1987.

In 1985, Moore and his partner, Robert Fulps, purchased a farmhouse in Deposit, New York. Renovating the house and establishing a flourishing garden deepened his connection to nature. He converted the barn on the property into a painting studio so that he could spend most of each summer, and much of the fall, in the country.

In 1985, Moore learned he was HIV positive. After his diagnosis, his work increasingly grappled with issues around AIDS, environmental degradation, bioethics, homosexuality, and health care. He became a noted AIDS activist. As a founding member of Visual AIDS, he was instrumental in creating and launching the Red Ribbon Project, which became a worldwide symbol of AIDS awareness.

Moore’s first solo show was at the Clocktower in Tribeca in 1983. He had numerous one-person exhibitions most notably at Sperone Westwater Gallery, which continues to represent his estate. His work has been exhibited widely in the US and internationally, including in the 1995 Whitney Biennial, at Artists Space in New York City, the Parish Art Museum in Southampton, New York, and in museums in London and Japan. Moore received the Academy Award in Art from the American Academy of Arts and Letters in 1999. A mid-career retrospective of his work opened at the Orlando Museum of Art in 2002, shortly after his death, and subsequently traveled to the Albright-Knox Art Gallery in Buffalo.

Moore’s work is represented in the collections of those museums, as well as in the Museum of Modern Art, the Whitney Museum of American Art, and the New York Public Library. A monograph on his work, Between Life & Death, was published by Twin Palms Publishers in 2002. His papers are in the collection of the Fales Library of New York University. A showing of the film Beehive was a highlight of the recent East Village Show at the New Museum of Contemporary Art.

As Roberta Smith wrote in her obituary in the New York Times:
Mr. Moore saw both sides of most issues, knowing that the advances of genetic engineering were keeping him alive yet deploring their effects on agriculture and human health. Linking his interest in AIDS and the environment, he once told an interviewer, “You cannot have healthy people in an unhealthy environment, and you can’t have a healthy environment where unhealthy—greedy, exploitative—people predominate”