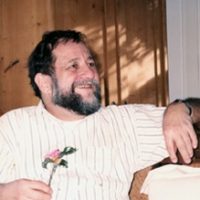 There are certain artists whose practice moves beyond the confines of any particular discipline, possessing sufficient assurance and fluency to cross the boundary of so-called fine art to explore the fertile territory of architecture, graphic and interior design and the collaborative arena of set design.That all their work is informed and enriched by this creative cross- pollination is frequently the reward for their courage and curiosity.

From the beginning of his professional career in the late 1950’s, Franklin Adams undertook significant projects in graphic design, such as the book design for Richard Schechner’s legendary production, Dionysius in ’69, set design for the Delta Festival Ballet and for numerous theatrical productions for New Orleans’ Le Petit Theâtre du Vieux Carre, the Contemporary Arts Center and Southern University. He also designed exhibitions for The New Orleans Museum of Art, including The Treasures of Tutankhamen in1977.

While engaged in the aforementioned diverse pursuits, Franklin also firmly established himself as a painter, draughtsman and sculptor, an artist of considerable reputation in the New Orleans art community. Over the years, his work was included such significant exhibitions as Louisiana Major Works and The Louisiana Sculpture Biennial, both in 1980 at New Orleans’ Contemporary Arts Center; in the Louisiana World Exposition in 1984; the Newcomb College Art Department Anniversary Exhibition at the New Orleans Museum of Artin 1986 and in the Twentieth Anniversary Exhibition at the Contemporary Arts Center in 1996.

In whatever medium or discipline, Franklin Adams’ work has a signature elegance, an ability to distill essence from whatever his subject has been.His is an essentially classical sensibility that also embraces the postmodern rejection of the segregation of high and low art, that understands the dialogue between ‘fine’ art and graphic design that has informed modern art since the nineteenth century.