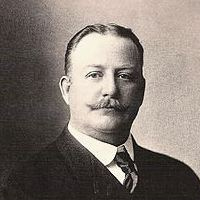 Frederic Remington is best known for his art depicting the cowboys, soldiers and Native Americans of the Old West. A native of Canton, New York, Remington found inspiration in these subjects from an early age.

His career took off in the mid-1880s when he began making western illustrations for Harper’s Weekly and many other widely read New York magazines. Remington’s pictures brought visual information to the eastern public accompanying both factual accounts and fiction of the Old West. He was praised and trusted for the accuracy of detail in his work. Many people assumed, and still assume, that he was a westerner, if not, in fact, a soldier or a cowboy himself. In truth, he was an easterner who was as fascinated by the subjects he depicted as his audience was.

Frederic Remington traveled west repeatedly. He loved the idea of the frontier and greatly admired the rough and heroic cowboys and soldiers he met there. He enjoyed meeting them, hearing their stories and following their lives in his visits as a journalist/illustrator. Among other things, he admired them for seeming undaunted by the many elements of frontier life that Remington himself could barely tolerate – poor and scarce “grub,” long rides in the saddle, and extended periods between baths.

On these trips, Remington collected innumerable materials to use as props to create convincingly detailed illustrations, paintings and bronzes in his studio in New Rochelle, New York. He took a camera and made his own photographs, not as art, but as notes. He bought hundreds of widely available western landscapes and portraits of Native Americans. He carried notebooks and sketched everything from distant horizons to the details of creases on leather boots.

He worked for the great magazines of the 1880s and 1890s, creating images of soldiers, cowboys and Indians that shaped the world’s perception of the American west. He produced over 3,000 signed paintings and drawings. Most of them were illustrations, but many were made as art as he turned away from the publishing world and accomplished masterful art. Today, he may be best known for his sculptures, which he began in 1895 with The Broncho Buster.