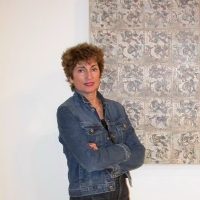 Watkins was born and raised in Washington, D.C. She studied nursing at Duke University and painting at American University, where she received an MA in 1963. Her early interest was in still life and figure painting, but during post-graduate studies a professor at American was crucial in sparking her interest in abstraction. Watkins cites the influence of minimalism on her use of the grid as an organizing structure. The paintings of William de Kooning and Jackson Pollock provided for Watkins examples for the excavation of compacted forms and for the sinuous use of line. From the work of Vermeer and Caravaggio, she learned to visually compose shapes into “combined forms.”

A graduate course in Renaissance sculpture was the beginning of the central influence of Italian art on Watkins’ work. Since 1982, the artist has visited Italy yearly to absorb the art and to study Italian. Of particular importance has been her study of ruins, frescos and ancient walls. In 1985, Watkins was artist-in-residence at the University of Georgia Studies Abroad program in Italy. In 2001, she was in a group exhibition the Marino Marini Museum in Pistoia and a solo exhibition at the Palazzo Ferretti in Cortona, Italy, in 2003.
During the mid-1970s, Watkins’ work developed into a series of grid paintings that employed a rosette motif from the tomb of the Egyptian goddess Nut. Both the presence of an ornamental pattern and the use of sanding techniques would become recurring features of the artist’s work. A series of shaped canvases in the mid-1970s was followed by the large paintings reflecting her immersion Italian culture that Watkins produced through the 1980s. In the late 1990s, she began her ongoing involvement in work employing color comics and stenciled floral forms.

Watkins, who for twenty years taught art at St. John’s College in Annapolis, MD, has exhibited her work extensively, including solo exhibitions at Duke University, the Susquehanna Art Museum and the Franz Bader Gallery in Washington, D.C.
Watkins’ group shows include “Linked to Landscape,” which traveled from the Corcoran Museum of Art to the Trenton City Museum of Art and the DeLand Museum. Her work is in many private and corporate collections, including those of Sallie Mae (Student Loan Mortgage Association), the Hyatt and Hilton corporations, the National Institutes of Health and the Greater Baltimore Medical Center. In 1996, her work was acquired by the prestigious Watkins Collection at American University.