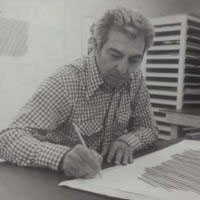 Garo Antreasian, painter, printmaker, master printer, and educator, was born in Indianapolis, Indiana on February 16, 1922. He began studying lithography at age seventeen at the Arsenal Technical High School and followed that with formal art training at the School of the Herron Art Institute where, in 1948, he received his Bachelor of Fine Arts degree. Upon graduation he was given a formal appointment to the faculty of the Herron and a $1,200.00 Mary Miliken Memorial Traveling Scholarship. The following year, Antreasian used a portion of the scholarship to study printmaking in New York at the Art Students’ League under Will Barnet and at Atelier 17 with Stanley William Hayter.

After working as an instructor at the School of the Herron Art Institute, Antreasian became the first technical director and master printer at the newly formed Tamarind Lithography Workshop in Los Angeles in 1960. In 1965, he followed Tamarind to Albuquerque, New Mexico where he also taught in the Art Department of the University of New Mexico.