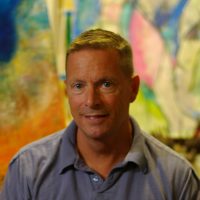 Gary Fisher is a Washington DC artist, attorney and local businessman. Since retirement from the United States Department of Justice in 2000, where he was a Senior environmental enforcement attorney, he has pursued a second career as a professional artist, served as a Counsel for Child Abuse and Neglect for the DC Superior Court and as Counsel at the National Fish & Wildlife Foundation. He is one on of the founding members of the dynamic Mid-City Artists Group in Washington, serves as the Art Director of The Results Galleries in the Results the Gym locations, and is a graduate of the Vander Zee School of Painting.

Gary was selected by the DC Commission on the Arts and Humanities to decorate one of 200 donkey and elephant sculptures, which were on display throughout the nation’s capital in the summer of 2002 as part of the “Party Animals” exhibition. He also decorated one of the dolphins on display in the summer of 2003 as part of Rehoboth Beach Delaware’s “Dolphins Around Town Project.” In addition, Gary’s abstract landscapes have been included in the U.S. State Department Art in Embassies Program and displayed in United States Foreign embassies. Many of Gary’s other oils, acrylics, and pastels hang in Washington, DC businesses and government offices, as well as in the homes of art collectors and friends around the world. He was one of two local artists to be showcased by Saks Fifth Avenue in 2002 with a major exhibition of his art in the windows of the retailer’s Chevy Chase, Maryland store.

Gary has participated in numerous Washington, DC art exhibitions including shows at Vander Zee Gallery, Gallery PlanB, the Studio Gallery, and Art 17 as well as shows sponsored by the Corcoran Gallery of Art Alternative Space, the Rivaga Gallery, the Wilson Art Center Gallery, Children’s National Hospital, and The Source Theatre. He regularly donates works to help raise money for such charitable organizations as Food & Friends, GLAAD, the Washington Gay Men’s Chorus, the Victory Fund, D.C. Appleseed and Delaware’s Camp Rehoboth. Gary enjoys his summers in Rehoboth Beach, where he is showing work at the Details Gallery and The Blue Moon and Philip Morton Gallery and has had solo art shows at The Blue Moon and Dos Locos in Rehoboth and the Peninsula Gallery in Lewes, Delaware.