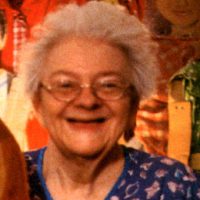 Gayleen Aiken was born in Barre, Vermont in 1934. Her father operated a sporting goods and fix-it shop on the first floor of the family’s large farmhouse. An only child, Aiken began drawing a group of imaginary playmates that she named “the Raimbilli cousins” just before entering grade school. By the time she was 8 or 9, she had made life-sized cutouts of 24 cousins—including “Cousin Gawleen”—using cardboard boxes from the outboard motors her father sold. She was teased and bullied by classmates, so her parents began home-schooling her in junior high. After her father died in the early 1950s, Aiken recalled, the family “got poor,” the beloved old farmhouse was sold, and she and her mother moved into an apartment. Still, Aiken continued making pen and crayon drawings of the Raimbilli cousins living out adventures she dreamed of having—from dancing in the moonlight and playing pranks on parents to witnessing inanimate objects sprout arms and legs and come to life. In the 1980s, Aiken began painting at workshops sponsored by Grass Roots Art and Community Effort (GRACE), a non-profit that brings art programs to nursing homes, mental health centers, and adult care centers in northern Vermont.