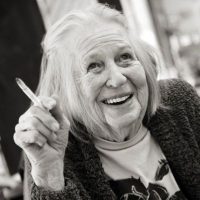 Genevieve Adams was born January 10, 1921 in Indianapolis, Indiana. As a child she lived in St. Louis, Missouri, Gross Pointe, Michigan, and Columbus, Ohio, where she attended Ohio State University. Her first oil painting was of her dog when she was 12 years old. At Ohio State University she studied art with Hoyt Sherman, and met her future husband Robert DeWeese. After graduating and during the war, Gennie taught school in Wilmington Delaware, moved briefly to New York City and did occupational therapy in an army hospital in Battle Creek Michigan. After the war she moved to Detroit and worked as a substitute teacher three days a week enabling her to paint the other four. She and Bob DeWeese were married in 1946, and their first child Cathie, was born in Iowa City the following year, where Bob was doing his graduate work in painting. After a brief time in Columbus Ohio where their second child Jan was born, and a year in Lubbock, Texas, Gennie and Bob and young family moved to Bozeman, Montana where Bob was hired to teach art at Montana State College. Their home on the edge of Bozeman where daughters Gretchen and Tina were born became a center for artists and creative thinkers involved with the college and the community. While raising her four children, Gennie maintained a studio at her home and continued to paint and exhibit her work. She also helped produce and starred as “Jenny” in a studio production of Brecht’s Three Penny Opera. While studying for her masters at Montana State University, Gennie’s studies were diverted by the birth of her fifth child, Josh, whom she fondly called her thesis. In 1965 the DeWeeses built a home on 9 acres in Cottonwood Canyon south of Bozeman. In the studio Gennie’s work shifted from non-objective painting to a more direct response to the natural world producing a large quantity of landscape paintings and woodblock prints much loved and collected by friends and the greater Montana community. She exhibited her work throughout Montana and the Northwest, and together with her husband Bob played a significant role in the development of the Montana contemporary arts community. Major works during this time included a large public art mural for the Bozeman Medical Arts Center, and a 121 foot landscape of a 360 degree view of the Gallatin Valley. Following the death of her husband in 1990 Gennie built a 1700 sq ft studio on the Cottonwood Canyon property and continued to produce large numbers of paintings and prints. During this time exhibitions of her work included major retrospectives at the Missoula Museum of Art and the Yellowstone Art Museum in Billings. In 1995 together with her late husband, Gennie received the Montana Governor’s Award for the Arts. That same year she was recipient of an Honorary Doctorate of Fine Arts from Montana State University. In 1998 Gennie was commissioned to paint a 35 by 10 foot painting for the Billings Deaconess Birthing Clinic, which she completed while recovering from a broken hip. Gennie had a strong interest in nurturing the careers of artists and together with her husband Bob she served as a mentor to many young artists in the state. She was an important role model for many women artists in the state. In this spirit the DeWeese Gallery was in operation at their South Cottonwood home for several years and presented the work of contemporary artists. Their home included a large collection of artwork acquired primarily through trades with other artists. Both were avid supporters of many forms of the arts and attended numerous art openings, theater and musical performances and cultural events throughout the state. In 1990 the Bozeman Senior High named the Robert and Gennie DeWeese Gallery in their honor. Gennie was passionate about issues concerning the environment and social justice, and maintained a steady interest in current world events. She was actively involved with a local campaign to prevent the clear-cut logging of South Cottonwood Canyon. She was an avid organic gardener and a great cook and hostess for countless dinner parties with friends, bringing many people together. Readers around the world know her as Robert Pirsig’s Montana friend in Zen and the Art of Motorcycle Maintenance. Her home continues to be visited by his followers. Though she often joked that she raised kids as a hobby, Gennie was a wonderful mother who taught her children a love of the arts, a sense of social justice, an appreciation of the natural world, and the importance of following their passions. On Mother’s Day in 2005 Gennie moved to her studio with the intention of focusing the last years of her life on her painting. The move proved to be fruitful as some of her best works were produced during this time. As with her other two homes the studio became the center not only of her own work but the gathering of many friends and fellow artists.