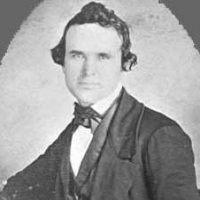 George Caleb Bingham (1811-1879) is renowned today as one of the classic artists of the American West. His paintings rank among the nation’s greatest art treasures.

Bingham can lay claim to being the first outstanding American artist from the “West”. He is best known for his genre scenes derived from the daily life of what was then the Western frontier. Lewis and Clark and the Corps of Discovery had returned from their 1804-06 westward exploration only five years before Bingham was born. In 1820, when Bingham was nine, Missouri became the 24 th state.

Bingham’s paintings from 1845-55—the decade of his best work—generally relate to life and commerce along the Mississippi and Missouri rivers, and to the American scene involving the people of Missouri in and around St. Louis, Columbia, Jefferson City, Arrow Rock, Boonville, and Kansas City.

His genre paintings—narratives of everyday life—depicted and immortalized the common man: fur traders and riverboatmen and settlers in scenes of frontier life (which he knew from both tradition and first hand observation); and scenes of the young nation’s democratic process: political campaigning and elections (which he knew from his deep involvement with the Whig party, with Missouri state politics and national politics, and as a seeker and achiever of political office).

Further enhancing Bingham’s body of work is portraiture and landscape painting. His portraits—representing a lifelong pursuit of commissioned work—for the most part depict prominent 19 th century Missourians and provide a singular historical resource. Bingham’s landscapes were at first created as background scenes for his portraits and then fashioned as settings for his genre paintings; many individual works, however, stand on their own and cover the entire range of style then current in American landscape painting.

During a career of 45 years, from 1834 onward, Bingham was increasingly singled out as “The Missouri Artist” and he could in fact be considered the state’s first artist. In Missouri his artistic talent, initially as a portraitist, was highly regarded from the beginning of his career, a rare and encouraging position for any artist, and especially for Bingham who was self taught and self supporting and without academic or artistic connections.

Many of Bingham’s paintings are regarded as iconic American images of 19 th century frontier life.