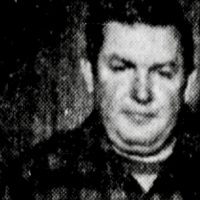 Gerard Healy (1928-1991) was a self-employed commercial artist who mostly specialized in photographs of commercial jets, military equipment, New York bridges, and “other aspects of American life.” His portfolio included advertisements for the Pan American and Trans World Airlines. Photography, however, was considered his hobby, as it was done occasionally when on annual leave, holidays, and after hours working for the military as an aircraft mechanic.

Originally from Hoboken, New Jersey, Healy moved to Jackson, New Jersey from Fort Lee in 1962. He received an Associate’s Degree in commercial art from the Pratt Institute, New York. Healy was first hired as a temporary employee by the Naval Air Test Facility based in Lakehurst in 1972. After completing his classroom studies and field training at a metal trades school, he was assigned to recovery track sites as a mechanic helper and worked in a machine shop with solvents and toxic chemicals. He was interested in photographing the base, wanting to “depict the people, facilities, and events in Navy Lakehurst.” In 1978, Healy was medically discharged after he was diagnosed with polycythemia vera, a type of blood cancer caused by an increasing amount of red blood cells and blood clots. As a result of the diagnosis, as well as his anxiety neurosis, he was forced to not work in an industrial environment with fumes and pollutants. On November 20, 1980, Healy testified before the House of Representatives regarding the issue with hazardous waste disposal at federal facilities, specifically during his time at Lakehurst. He was a Navy veteran of the Korean War, and was part of the American Legion and Veterans of Foreign Wars. He also served as chairman of the Historical and Cultural Commission of Jackson and member of the Jackson Democratic Club.