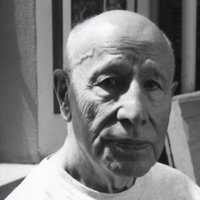 Born in Brooklyn in 1921, Gerson showed promise in his high school art classes. Later, while stationed in Hungary in the army, he took classes at the Royal Academy of Art in Budapest. After the war, he studied at the Art Students League–painting with Louis Bosa and printmaking with Will Barnet. Later, at the Brooklyn Museum’s art school, Gerson began engraving with Gabor Peterdi. His prints won many awards and were featured in many one-person shows, including exhibitions at Associated American Artists and the Alex Rosenberg Gallery.

To support the couple during his art studies, Gerson’s wife, Judith Leiber, designed handbags for major manufacturers. In the 1960s, Gerson persuaded Judith to produce her bags independently, and they opened their own business based on Judith’s designs. The now-famous company reflects the couple’s shared taste in art.

The Leibers bought a farmhouse in East Hampton, Long Island, with a garden that became an inspiration to Gerson. He designed and manipulated the natural shapes to form a living, growing cubism, and these forms and colors became the focus of much of his art. Inspired by gardens, nature, and aspects of the world of fashion, Gerson explores these themes in his present cubist and expressionist work.

Gerson maintains his lifelong commitment to printmaking. He taught etching and engraving at the Printmaking Workshop established by Robert Blackburn. Emphasis in his work turned to painting in the mid-50s, but he continues to produce and exhibit his prints.