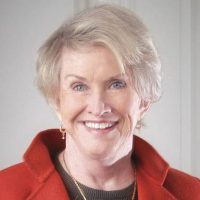 All across America in countless public, private, municipal and museum collections, Glenna Goodacre’s bronze sculptures are immediately recognizable for their lively expression and texture, and for their intriguing composition. After graduation from Colorado College and classes at the Art Student’s League in New York, she became a successful Texas painter, but since 1969 she has concentrated mainly on sculpture.

Her most well-known work is the Vietnam Women’s Memorial installed in Washington, D.C. in 1993. Goodacre was selected in 1997 as sculptor for the monumental Irish Memorial in Philadelphia. Completed and installed at Penn’s Landing in 2003, the massive bronze is her most ambitious public sculpture—with 35 life-size figures. In 1998, her 8-foot standing portrait of Ronald Reagan was unveiled at the Reagan Library in California. Another cast is at the National Cowboy & Western Heritage Museum in Oklahoma City. After a nationwide competition for a Sacagawea dollar coin design in 1999, Goodacre’s rendering for the face was unveiled at the White House by First Lady Hillary Clinton. Continuously minted since 2000 to the present, the dollar has been re-released this year with a new obverse featuring Native American themes. In 2004, her heroic bronze portrait of legendary West Point Coach Colonel Earl “Red” Blaik was dedicated at the National College Football Hall Of Fame.