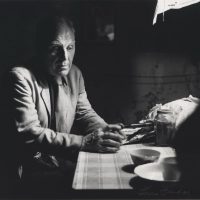 Godfrey Miller was born in Wellington, New Zealand. He studied architecture at the Otago School of Art and Design 1910-13 and at the Dunedin Technical School 1910-11. During the first world war he enlisted with the New Zealand Engineers and served on Gallipoli, where he was wounded in 1916. He moved to Melbourne in 1918 and began his career in painting, studying at the National Gallery of Victoria Art School from 1923-4. He travelled to London in 1929 and studied at the Slade School of Fine Art 1929-30 and part-time from 1933-8. He returned to Sydney in 1938 and taught at the East Sydney Technical College from 1945 until his death. Miller was interested in theosophical colour theories, and colour as a circular flow held by blacks and whites. He portrayed simple subjects – still lifes, landscapes and the human figure, working with painstaking rigour, with geometric precision to create images with jewel-like surface and ethereal delicacy. He used ruled lines crossing the canvas to form a web-like grid, to suggest the endless possibilities of life, the wholeness of forms and their potential dissolution back to the elements.