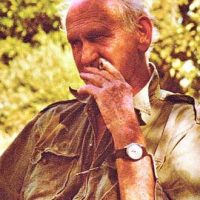 Guy Grey-Smith had been a POW in Germany before being repatriated to England suffering from Tuberculosis. After the war, Guy Grey-Smith studied at the Chelsea School of Art under Ceri Richards, who introduced him to Cezanne and Matisse. ‘One of the earliest works in the Holmes à Court collection, Perth, is a small painting of a kitchen sink that shows how quickly he latched on to Cezanne’s structural principles’ (Snell). After returning to WA he built a house at Darlington, a small village nestled in the Darling Scarp just outside the Perth metropolitan area, where he and the Holmes à Courts lived and became friends in the 1960s. The Holmes à Courts became his best patrons. Grey-Smith’s painting transposed European modernism onto local fauna and flora, e.g. Kings Park, Perth (1948, Holmes à Court col.).