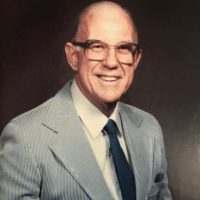 As midcentury abstract watercolorist and mixed media artist Guy Watson stated: “If you make art to please yourself, you may just please others.”Referring to his style as “construction art,” Watson obtained found objects like glass or wood pieces and arranged them to create visual patterns or images that others were unable to see in each composition.

A native of Charleston, West Virginia, Watson began his avocation as a local artist while at a rehabilitation hospital in Fort Story, Virginia during World War II. While recuperating from his wounds received during his Army service in the South Pacific, in order to do something with his hands, he had to decide between knitting and painting. After studying with instructor Mabel Rollins Harris, Watson returned to Charleston and attended the Mason College of Fine Arts, graduating with an art certificate; his teachers were cubist artist Grace Martin Taylor and landscape oil painter Raphael Gleitsmann. He worked at the Libbey-Owens-Ford glass company for 39 years until his retirement in 1975. During his time there, he designed stain glass windows for prayer chapels at the Charleston General Hospital and the First Christian Church. Watson became involved in art framing when he could not find suitable frames for his watercolors and collages. Other artists requested his frames as word of his expertise spread, so he opened Watson’s Picture Framing, now owned by his daughters Barbara Tabaretti and Sherry Murray with son-in-law Steve Murray. He won over 11 awards in sculpture and painting, including first prize at the Rhododendron Art and Craft Fair in Charleston. Watson was an active member of the Allied Artists of West Virginia for many years and served on their annual exhibition committee as vice president. In June 1966, his artwork was one of 28 that were part of the club’s traveling exhibition, debuting around universities and galleries in West Virginia, Maryland, Pennsylvania, and Washington, D.C. Other solo and group exhibitions include the Parkersburg Art Center, Huntington Galleries—both in West Virginia—and the Butler Institute of Art in Pennsylvania.