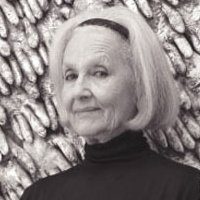 Zeitlin’s visual voice communicates her ideas in a witty, decorative, realistic, archetypal and symbolic manner through two-dimensional and three-dimensional works; and forms-in-relief. “I have made use of my collected memories and have recaptured, recomposed and reorganized these experiences into my own art…the role of the artist in society is a noble one and one in which I feel privileged to participate” (Harriet Zeitlin 2008).

Harriet Zeitlin speaks of the importance of her world travels and personal life experiences that have inspired and influenced her direction as an artist. Her mixed media artwork specifically shows a strong East Indian influence and is imbued with spontaneous energy and a look at the past. If one looks carefully, the subtle threads of Zeitlin’s Eastern experiences may be mysteriously discovered, woven into the tapestry of each of her works.

The artwork of Harriet Zeitlin is found in significant public art collections, nationally and internationally. These collections include the Los Angeles County Museum of Art, California; Library of Congress, Washington D.C.; Fluor Corporation, California; Cedars Sinai Medical Center, California; University of Judaism, California; United States Embassy, New Delhi, India. Among her numerous honors she was invited to participate in the Arts in Embassies Program in Hong Kong; and Namibia, Africa.