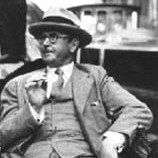 Walter Harrison Cady (1877–1970) was an American illustrator best known for his Peter Rabbit comic strip which he drew for 28 years. Cady was born in Gardner, Massachusetts, to a town selectman, Edwin Cady, who ran a local general store. His father fostered a love of nature and encouraged his art skills. Cady entered an apprenticeship with a local painter, Parker Perkins. His first publication came as early as 1894: an illustration in a supplement to Harper’s Young People (signed Walter H. Cady).