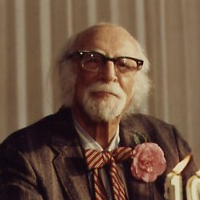 Throughout his 26 years as a painter, Mr. Lieberman completed hundreds of pieces and his work was shown in museums and galleries in Great Neck, in New York and in the Hirshhorn Museum in Washington. His work has also been on display in Houston, Seattle, Los Angeles, La Jolla, Calif., and Rotterdam, Holland.

It was the boredom of his retirement after selling his confectioner business at the age of 74 that prompted Mr. Lieberman to try his hand at sketching at an art class at the Great Neck Golden Age Club.

Mr. Lieberman soon moved on to watercolors and oil painting, using the two-dimensional primitive style. As a young man Mr. Lieberman studied the Talmud, and stories from that religious work as well as the Bible served as the subject matter for most of his paintings.