Henri Dangon (fl. 1914) was a French artist notable for his art-nouveau style color lithographs.  Little is known about Dangon, but he was an illustrator for Le Sourire, a Parisian monthly magazine that ran from 1899 to the Fall of France in 1940. He also served as a private in the First Army during World War I. In 1916, the Ministry of Beaux-Arts and the Ministry of War in France sponsored official war exhibitions on the home front by artists who served in World War I. The group exhibition that showcased Dangon’s lithograph was located in the Salon des Armées, and the proceeds benefited the disabled and impoverished artists. His poster, titled Salon des Armees, réservé aux artistes du front. Au profit des oeuvres de guerre. Jardin des Tuileries,  won first prize during the 1916 exhibition. It depicts a poilu, or infantry soldier, holding a carved wooden statue of winged victory. His poster was exhibited at the Salmagundi Club in New York until April 1918. 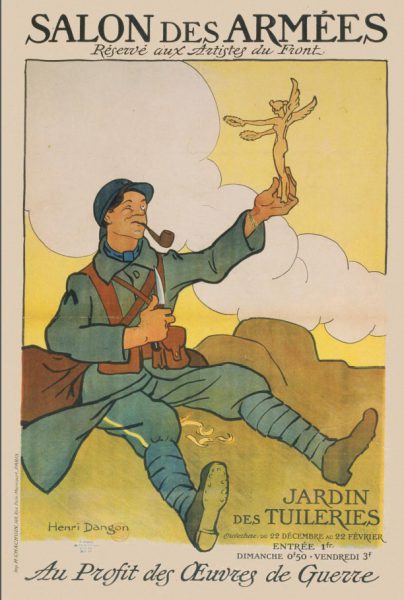