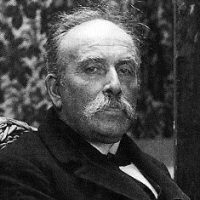 Henri Rousseau’s modest background belied his aspirations. Born in 1844 in Laval, a market town in northwest France, he was a provincial transplant to Paris who was impoverished for most of his life. He worked as a customs clerk on the outskirts of the city, a post that earned him the nickname Le Douanier (the customs agent). A self-taught artist, Rousseau was unable to paint full time until his retirement in 1893. Despite these inauspicious circumstances, he hoped to join the refined artists of the staunchly conservative French Academy.

As an outsider, however, Rousseau was less familiar with the rules of the artistic establishment. Although he worked in traditional genres, producing landscapes, portraits, allegories, and exotic scenes, they were transformed in his hands, made odd in ways that provoked both derision and admiration. In contrast to academic artists, Rousseau brought to ambitious painting an openness to the materials of popular culture—illustrated magazines, dime store adventure novels, postcards, and photographs—often integrating their strong graphic quality and dramatic subject matter into his work.

Rousseau was best known for his bold pictures of the jungle, teeming with flora and fauna. Yet this painter of exotic locales never left France, notwithstanding stories to the contrary. His paintings were instead the concoctions of a city dweller, shaped by visits to the botanical gardens, the zoo, and colonial expositions as well as images of distant lands seen in books and magazines. A counterpoint to his pictures of a tranquil and familiar Paris, these images of seductive and terrifying faraway places reflected the desires and fears of new modern world.

In the end, Rousseau’s work found enthusiastic acceptance outside the establishment: he was championed by a younger generation of avant-garde artists and writers, including Alfred Jarry, Guillaume Apollinaire, Robert Delaunay, and Pablo Picasso, who admired the liberties he took, seeing in them new possibilities for the future.