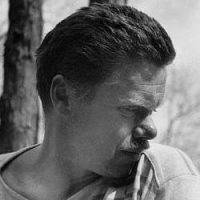 Born in Chapman, Kansas, Poor attended Stanford University, studied painting at the Slade School and under painter Walter Sickert in London, then attended the Académie Julian in Paris. In 1925 he married journalist and writer Bessie Breuer.
He is a grandnephew of the Henry Varnum Poor who was a founder of the predecessor firm to Standard & Poor’s.

In 1950, Poor became the resident artist at the American Academy in Rome, and Professor of Painting at Columbia University in 1952. He was also appointed to the United States Commission of Fine Arts in 1944-45.

Self-taught as an architect, Poor designed the “Crow House” on South Mountain Road in New City, New York for himself, and designed houses or home renovations for Kurt Weill and Lotte Lenya, John Houseman, Burgess Meredith and Maxwell Anderson. He was also a potter, with ceramics in the permanent collections of the Art Institute of Chicago and the Metropolitan Museum of Art, and ceramics designed for Radio City Music Hall.