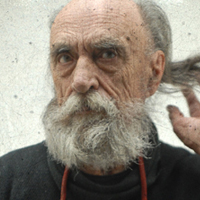 Acclaim, opportunity, and experimentation marked Hollis’s artistic life in the ’60s. Hot wire foam and melted wax sculptures echoed the shapes found in his paintings. His flair for the transformational extended into the sensational. A clipping from the Minneapolis Tribune in 1966 shows him dramatically enacting French sculptor Nikki de St Phalle’s piece, which entailed shooting a pop gun into plaster paint balloons on canvas.

Solo shows, awards, and poetic endorsements from local critics such as John Sherman and former director of the MIA (1963-1973) Anthony Clark seemed to indicate Hollis was destined for a larger sphere of influence. Thus spurred on, Hollis and his wife Karen Meyers moved to NYC and into a studio on Broadway and Canal, close to Robert Rauschenberg’s (whom he’d met when they’d both shown at the Walker).