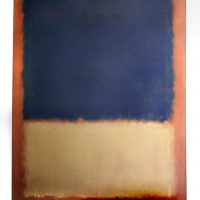 Holly Roberts’ first national exposure came in 1989 with the publication of the monograph Holly Roberts, published by the Friends of Photography. Although her work is based on the photograph, it is the inclusion of paint that continues to make it so distinctive. As David Featherstone says in his introduction, “While it is Roberts’ evolving interaction with the photograph that takes her to her finished work, it is the existence of the underlying photographic image–even whin it is obscured by paint–that gives the work its powerful qualities and sets up the emotional challenge for the viewer.” Her work has continued to evolve, but she has reversed her original process of heavily overpainting the black and white silver print. She now works on the painted surface, developing a narrative scene with collaged photographic elements. Holly Roberts’ work has been featured in two other monographs, Holly Roberts: Works 1989-1999 and Holly Roberts: 2000-2009.