Ibram Lassaw came from Egypt to New York as a child. He studied at the Clay Club from 1926 to 1930, and at the Beaux Arts Institute of Design in New York in 1930 and 1931. Yet he was haunted by the work of Jacques Villon, Sophie Taeuber-Arp, and Wassily Kandinsky that he saw in an exhibition of Katherine Dreier’s famed Societé Anonyme collection at the Brooklyn Museum in the winter of 1926-27. His turn to abstraction in the early 1930s began with Constructivist drawings. However, it was the English language version of Laszlo Moholy-Nagy’s The New Vision, and several articles on “Universal Architecture” by Buckminster Fuller that gave Lassaw a framework for understanding the new art. To Lassaw, Moholy-Nagy’s book was important less for its philosophical stance than for its illustrations of the tactile experiments conducted at the Bauhaus that suggested new materials and new sculptural processes. Fuller “opened up . . . new perspectives” for Lassaw because he discussed the similarities between architectural design and such natural systems as trees and the human body.

Lassaw’s early abstract sculptures, which were modeled in clay and then cast in plaster, explored biomorphic shape and open form. Since that time, whether in constructions of metal and Plexiglas or in his brazed and welded pieces, the interpenetration of form in space has remained one of his abiding concerns. During the mid 1930s, Lassaw worked briefly for the Public Works of Art Project cleaning sculptural monuments around New York City. He subsequently joined the WPA as a teacher and sculptor until he was drafted into the army in 1942.

Much of Lassaw’s experimentation during the 1930s focused on process—finding appropriate methods to express dual respect for space and “truth to materials.” He gave up plaster work as too fragile for open-form sculpture. He briefly tried liquid latex, which for a variety of reasons, including its smell, was unsatisfactory. With Gertrude Greene, he bought a forge and tried hammering steel, but found the results excessively two-dimensional.

About 1937 he began constructing sculpture. From an old refrigerator motor he improvised brazing tools and began to build frameworks with iron rods. To these structures, which he painted, he connected carved white wooden shapes. In the 1938 annual exhibition of the American Abstract Artists, he showed a series of shadow boxes, shallow wooden containers holding plaster-coated wire, mesh, and free-form organic shapes that were lighted with electric bulbs. In these works, Lassaw sought a formal balance between geometric and organic form. But when he showed a steel and plastic sculpture entitled Intersecting Rectangles in the 1941 American Abstract Artists exhibition, Piet Mondrian encouraged him to proceed along Neo-plastic lines. During the next several years, Lassaw experimented with geometric, Constructivist spatial configurations, often combining steel with plastic and Lucite. Yet, while each approach offered intriguing possibilities, none enabled Lassaw to work freely and intuitively. A breakthrough came for him in 1950. In a sculpture entitled Milky Way, he dripped melted plastic over a wire armature. Although neither aesthetically pleasing nor durable, Milky Way nonetheless set the stage for Lassaw’s future direction.

During World War II, Lassaw had learned to weld, and in 1951, when he sold his first piece of sculpture, he bought oxyacetylene welding equipment. Following the direction of Milky Way, he welded rods into open-form architectonic structures, then encrusted the surfaces with droplets of metal. By using different alloys within the same piece, Lassaw achieved remarkable variations in color, which he also enhanced through chemical treatment. With sculpture such as The Hyades (1951), Lassaw found methods and materials that integrated biomorphic and geometric form while satisfying his need to work freely and intuitively.

Lassaw once remarked that all artists have ancestors. In his own work, he claimed affinities with the sculpture of Julio Gonzalez, Naum Gabo, Antoine Pevsner, Vladimir Tatlin, Jacques Lipchitz, Joan Miró, and others. Unlike many of his fellow members of the American Abstract Artists who deplored Surrealism as formally backward, Lassaw borrowed freely from Miró, especially during the mid 1930s. During this time, he also assigned neutral titles to his work- Composition with Light, for example, or Three Biomorphic Forms. In 1944, he first used the names of astronomical phenomena, Zen precepts, and Jungian terms, suggesting evocative, often cosmic, allusions.

Lassaw was a founding member of the American Abstract Artists and showed with the group until his induction into the army. After the war, however, his art moved closer to the concerns of Abstract Expressionism. With Ad Reinhardt, he was a founding member of The Club. Despite his involvement with these and other groups, and his frequent inclusion in group shows, it was not until Samuel Kootz had seen his work at the Whitney Museum that Lassaw had his first solo exhibition (1951). In the following years, Lassaw emerged as one of the most provocative and significant artists of the century. He has exhibited frequently, and his sculpture has received wide-ranging, positive critical attention. 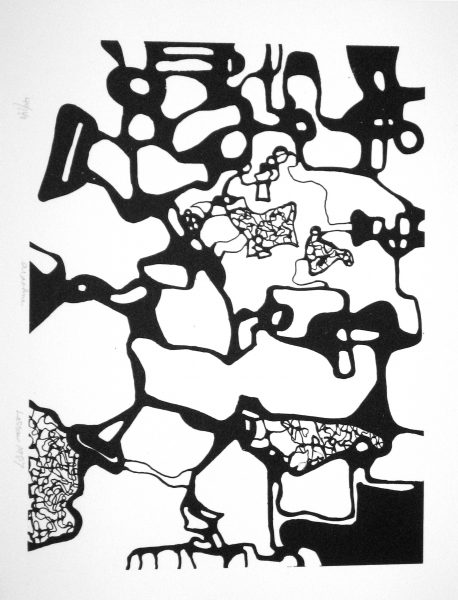