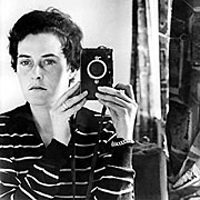 Inge Morath is one of the most admired photographers world wide. She was born in Graz, but she was a true cosmopolitan feeling at home in Vienna, Berlin, Paris, London, New York and in the many destinations her professional travels took her, too.

Morath started her career as a journalist for various magazines. She wrote the captions and texts to accompany the photographies of Ernst Haas. Robert Capa, who had just founded Magnum agency, invited her to join as an editor. Inge Morath moved to Paris and worked as an assistant to Henry Cartier-Besson. Almost by accident she discovered that her true talent was photographying rather than writing.

The following years she would travel extensively. Europe, North Africa and the Middle East were among her favourite destinations. But her great strength was the portray and she was asked to take photographs of contemporary celebs among them Marilyn Monroe whooting ‘The Misfits’. Her portraits of Marilyn Monroe belong the most graceful images of the superstar. At this occasion she met American writer Arthur Miller, then married to Ms. Monroe. After their divorce, Inge Morath became Miller’s second wife. Their marriage would last till Inge Morath’s death.