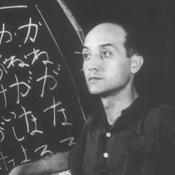 Isamu Noguchi was one of the twentieth century’s most important and critically acclaimed sculptors. Through a lifetime of artistic experimentation, he created sculptures, gardens, furniture and lighting designs, ceramics, architecture, and set designs. His work, at once subtle and bold, traditional and modern, set a new standard for the reintegration of the arts.

Born in Los Angeles, California, to an American mother and a Japanese father, Noguchi lived in Japan until the age of thirteen, when he moved to Indiana. While studying pre-medicine at Columbia University, he took evening sculpture classes on New York’s Lower East Side, mentoring with the sculptor Onorio Ruotolo. He soon left the University to become an academic sculptor.

In 1926 Noguchi saw an exhibition in New York of the work of Constantin Brancusi’s that profoundly changed his artistic direction. With a John Simon Guggenheim Fellowship, Noguchi went to Paris, and from 1927 to 1929 worked in Brancusi’s studio. Inspired by the older artist’s reductive forms, Noguchi turned to modernism and a kind of abstraction, infusing his highly finished pieces with a lyrical and emotional expressiveness, and with an aura of mystery.

Noguchi’s work was not recognized in the United States until 1938, when he completed a large-scale sculpture symbolizing the freedom of the press, which was commissioned for the Associated Press building in Rockefeller Center, New York City. This was the first of what would become numerous celebrated public works worldwide, ranging from playgrounds to plazas, gardens to fountains, all reflecting his belief in the social significance sculpture.

In 1942 Noguchi set up his studio at 33 MacDougal Alley, in Greenwich Village, having spent much of the 1930s based in New York City but traveling in Asia, Mexico, and Europe.

The Japanese attack on Pearl Harbor and the backlash against Japanese-Americans in the United States had a dramatic personal effect on Noguchi, motivating him to become a political activist. In 1942 he started Nisei Writers and Artists Mobilization for Democracy, a group dedicated to raising awareness of the patriotism of Japanese-Americans. He also asked to be placed in an internment camp in Arizona, where he lived for a brief seven months. Following the War, Noguchi spent a great deal of time in Japan exploring the wrenching issues raised during the previous years. His ideas and feelings are reflected in his work of the time, particularly the delicate slab sculptures included in the 1946 exhibition “Fourteen Americans,” at The Museum of Modern Art, New York.

Noguchi did not belong to any particular movement, but collaborated with artists working in a range of different mediums and schools. He created stage sets as early as 1935 for the dancer/choreographer Martha Graham, that began a lifelong collaboration, as well as for dancers/choreographers Merce Cunningham, Erick Hawkins, and George Balanchine and composer John Cage. In the 1960s he began working with stone carver Masatoshi Izumi on the island of Shikoku, Japan, a collaboration that would also continue for the rest of his life, and from 1960 to 1966 he worked on a playground design with the architect Louis Kahn.

When given the opportunity to venture into the mass-production of his interior designs, Noguchi seized it. In 1937 he designed a Bakelite intercom for the Zenith Radio Corporation, and in 1947, his glass-topped table was produced by Herman Miller. This design—along with others such as his designs for Akari Light Sculptures which was developed in 1951 using traditional Japanese materials—are still being produced today.

In 1985 Noguchi opened The Isamu Noguchi Garden Museum (now known as The Noguchi Museum), in Long Island City, New York. The Museum, established and designed by the artist, marked the culmination of his commitment to public spaces. Located in a 1920s industrial building across the street from where the artist had established a studio in 1960, it has a serene outdoor sculpture garden, and many galleries that display Noguchi’s work, along with photographs and models from his career.

Noguchi’s first retrospective in the United States was in 1968, at the Whitney Museum of American Art, in New York City. In 1986, he represented the United States at the Venice Biennale. Noguchi received the Edward MacDowell Medal for Outstanding Lifetime Contribution to the Arts in 1982; the Kyoto Prize in Arts in 1986; the National Medal of Arts in 1987; and the Order of Sacred Treasure from the Japanese government in 1988.