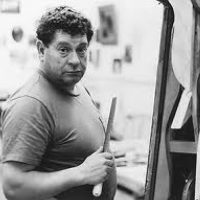 Italo Scanga, a sculptor and painter who fashioned much of his work from found objects in a style that blended Cubist and folk influences, died on July 27 at his studio in Pacific Beach, California. He was 69.

Mr. Scanga’s materials included natural objects like branches and seashells, as well as kitsch figurines, castoff musical instruments and decorative trinkets salvaged from flea markets and thrift shops. He combined these ingredients into free-standing assemblages, which he then painted. Although visually ebullient, the results sometimes referred to gruesome episodes from Greek mythology or the lives and deaths of martyred saints.

He worked in many media, including printmaking, ceramics and glass, and considered his artistic influences to be sweepingly pan-cultural, from African sculpture to Giorgio de Chirico. He often collaborated with the sculptor Dale Chihuly, who was a close friend.

Mr. Scanga was born in the Calabria region of Italy, and at 14 immigrated to the United States with his family after World War II. Living in Detroit, he worked on the General Motors assembly line and served in the United States Army before attending Michigan State University, where he received a bachelor’s degree in 1960 and a master’s degree in sculpture a year later.

His work is in the collection of many museums, including the Metropolitan Museum of Art and the Museum of Modern Art in New York and the Art Institute of Chicago.