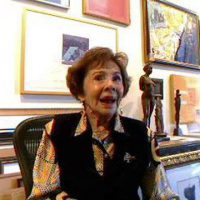 J. McNeil Sargent was a dynamic force in the San Diego art scene since her move here over twenty-seven years ago from Washington D.C. A world traveler with a wide-ranging experience in the arts, her focus had been largely in the graphics field. She was also an accomplished oil painter.

Upon tracing her roots back to John Singer Sargent and James McNeil Whistler, it prompted her to take on the “nom d’artiste” J. McNeil Sargent (aka Jean Braley).

One of her first undertakings when she arrived in San Diego was to organize and serve as president of the local chapter of National Artists’ Equity. The chapter grew to a membership of over three hundred artists.

In 1982, she was asked by artist Francoise Gilot to become Executive Director of the Printmakers’ Atelier. Under her guidance the Atelier gained international recognition in the graphics field. She also founder and chairperson of the Sargent Art Group a partnership of professional and emerging artists.

McNeil is represented in over four hundred public and private collections, and is listed in Who’s Who in American Art. Her original graphics are in the Bibliotheque Nationale de France; the American Embassy program in Washington D.C.; the Smithsonian Institute Washington D.C.; the Las Vegas Museum, Las Vegas, AZ and others.

McNeil found inspiration on the Cote d’Azur of France, where she would spend half of each year working on her art for upcoming exhibits. In 2007 she had a show in Paris at La Gallerie Myriam H. With exhibits throughout the world, it is no wonder that the Center of Women’s Studies at San Diego State University, named McNeil Sargent as one of the four outstanding women artists in San Diego.

McNeil passed away in October of 2012. This page shall remain as a tribute to SAG’s founder and leader.

My Affair with Art McNeils 48 page book of memoirs is now available online. Includes over 25 color images and many wonderful stories of her life. Please use the following link to purchase.