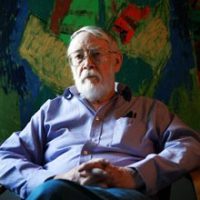 Known for his dreamlike, imaginative paintings and bold prints, Jack McLarty attended PNCA (then the Museum Art School) in the late 1930’s and began teaching at the College during the following decade, serving as dean for several years. Represented in numerous collections including the Smithsonian, the Seattle Art Museum, and the Portland Art Museum, his work is also reproduced in three catalogues devoted separately to his drawing, painting, and printmaking.

Exploring different styles and mediums came naturally to McLarty. “I have quite a lot of skill, so I’ve always been able to do whatever came to mind,” he says with a shrug. He credits the Museum Art School with bringing out that skill. “My memories of the Art School are just wonderful. It was all focused on art,” he says. He credits a teacher, Impressionist painter Clara Jane Stephens, with “saving his life” by encouraging him to pursue his artistic dreams.

McLarty grew up in in Portland, and draws inspiration from the city’s river and street scenes. Decades before he became an important regional artist with a widely-known installation at City Hall, he lived across from that very building—in the City Hall Apartments, which his parents managed. He says with a chuckle, “I always think I’m a city boy. I’m not really comfortable out in the wilds. The wildest country is right down the street, with the slot machines and the other stuff. I am familiar with it, I understand it, and it’s pictorial to me.”