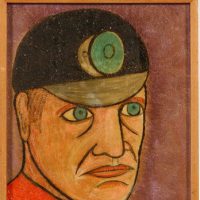 Jack Savitsky, born in Silver Creek, Pennsylvania, spent his entire life in the coal mining region of Pennsylvania. At twelve, Savitsky quit school in sixth grade. His father sent him to work in the mines to earn his keep.

The mine he worked in was closed in 1959. It was his son who recommended that Savitsky should become a painter. His wife, being an art teacher, supplied him with acrylics and other supplies. Jack Jr. introduced Jack Sr to painter Sterling Strauser in 1961. Upon seeing Savisky’s paintings, Sterling Strauser began promoting Savitsky in New York’s art world.

His son also began taking Savitsky to New York museums and galleries where Van Gogh became among his favorite artists. Once he was reprimanded by security at the Guggenheim Museum for feeling the surfaces of Van Gogh’s works.

Savitsky was afflicted by black lung disease and in 1980, his doctor advised him that the fumes of oil paint were making his disease worsen. Savitsky began to create with prismacolor, colored pencils and marks on paper. He would draw on any surface that was available from notebooks, wood and even inside out cereal boxes. Most of Savitsky’s works were inspired by Pennsylvania Coal Region. Savitsky worked from memory to create the mine scenes. He took inspiration from Van Gogh. He also was inspired by various Biblical scenes.

Due to complications from the Black Lung disease, Savitsky died.