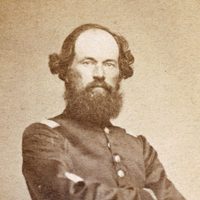 James Hope was born in Scotland and, following the death of his mother, accompanied his father to Canada. At the age of twelve he was orphaned in a cholera outbreak. Soon apprenticed to a wagon maker in Vermont, he quickly demonstrated that his native intelligence and artistic talent precluded a tradesman’s career. With money saved he attended the Castleton Vermont Seminary for a year and took up portrait painting. He painted in Rutland, Vermont in 1843, but moved to the more lucrative market of Montreal from 1844 to 1846. Upon leaving Montreal, Hope reestablished in Castleton and devoted himself to landscape painting. In 1849 Frederic Church worked for a summer in nearby Clarendon Springs, and it seems likely that he influenced Hope to focus his attentions on New York City. Hope send a Castleton landscape to the 1849 exhibition of the American Art Union and by 1854 head work accepted by the National Academy of Design. Thereafter, for more than twenty-five years, he was a frequent contributor to the exhibitions there and a the Brooklyn Art Association. An occasional exhibitor in Boston, he also sent paintings to shows in Philadelphia, Buffalo, Cincinnati, Detroit, Utica, Chicago, and St. Louis.

Hope was among the group of artists who saw active duty in the Civil War, participating in eleven battles. After the war he acquired popularity as a painter of battle scenes. By 1872, however, he built a studio and art gallery in Watkins Glen, New York. There he spent the last twenty years of his life as artist laureate of the water and wind-hewn geologic formations found in the vicinity.

Hope was elected an Associate Member of the National Academy of Design in 1871.