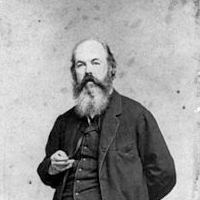 James Reid Lambdin was born in Pittsburgh, Pennsylvania, where at an early age he decided that he wanted to become an artist. He traveled to Philadelphia and studied under English miniature painter, Edward Miles and renowned portraitist Thomas Sully. He returned to Pittsburgh in 1826 to pursue portraiture commissions. In 1828 he opened the Pittsburgh Museum of Natural History, which featured, not only paintings, but fossils as well. Lambdin developed into a skilled, and much sought after, portrait painter and become the most esteemed portraitist in the nation. His subjects included politicians, soldiers in military uniform, and fifteen United States Presidents.

In 1837 he moved to Philadelphia where he served as president of the Artist’s Society Fund, director of the Pennsylvania Academy of Fine Arts, and also was a professor of fine arts at the University of Pennsylvania. He was appointed by President Buchannan to serve as one of the United States arts commissioners. Although best known as a portrait painter, he was also an accomplished landscape painter as well. Most of his landscapes were small watercolors, notably of Lake George and the Catskills in New York. Outside of paintings in the White House, this extraordinary work is one of the best by an important listed painter of presidential portraits.