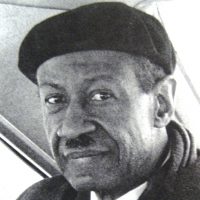 Porter was born in Baltimore, Maryland. His father, the Reverend John Porter, was a leader in the African Methodist Episcopal church, and religion played a major role in Porter family life. The Reverend Porter wanted James, one of eight children, to become a minister. Instead, James fell in love with drawing and painting, and from an early age he knew he wanted to be an artist.

The Porter family moved to Washington, D.C., when James was in high school. Once settled in Washington, the Reverend introduced his son to James V. Herring, the head of Howard University’s art department, in the hope that Herring would talk James out of pursuing his artistic dreams. The ploy backfired, and Herring, recognizing the young Porter’s talent, not only encouraged him to continue making art, but urged him to do it at Howard when he was done with high school.

Porter graduated from high school at the top of his class and was offered a scholarship to Yale. Since the scholarship covered only tuition, and he could not afford living expenses, Porter had to decline the offer. Howard University, on the other hand, was close enough to allow Porter to live at home, so he accepted a scholarship, arranged by Herring, to attend that school.

Porter entered Howard in 1923. He performed so well as a student that, upon graduating in 1927, he was offered a teaching position. In preparation for his career as an art instructor, he spent the summer studying art education at Columbia University in New York. Porter continued to hone his painting skills at the same time, studying at the Art Students League with the well-known painting tutor Dimitri Romanovsky.

In the course of his studies, Porter became acutely aware of how poorly the art community in the United States had kept track of African American artists. He began to take an interest in unearthing information about gifted but forgotten black artists of the past. As his drawing and painting skills developed further, Porter began to gain recognition as an artist. In 1929 he won an honorable mention from the Harmon Foundation, an organization committed to honoring “distinguished achievements among Negroes.” The Harmon Foundation honored Porter again in 1933, awarding him its Schomburg portrait prize for his painting Woman Holding Jug.

During the 1930s, Porter traveled widely and broadened his knowledge of artistic styles around the world and throughout history. In 1935 he received a fellowship from the Institute of International Education, which he used to study medieval archaeology at the Sorbonne in Paris. When his work in Paris was completed, Porter traveled throughout Europe studying European and African art with the aid of a grant from the Rockefeller Foundation. Returning to the United States, Porter earned his master’s degree in art history from New York University in 1937. He then returned to Howard University to resume his teaching career.

Porter continued his research on African American artists. The next several years of work in this area resulted in the 1943 publication of Modern Negro Art, a pioneering effort that has remained an important source of information on the topic ever since. Modern Negro Art was essentially a critical survey of African American artists through the time of its publication. The book brought many of the profiled artists back into the public eye after decades– sometimes more than a century–of obscurity.

Porter continued to travel in search of artistic insight over the next several years. During the 1945-46 academic year, he studied art in Cuba and Haiti, again with financial assistance from the Rockefeller Foundation. Much of the material he collected on this trip was used to develop a Latin-American art curriculum at Howard.

When Herring retired from Howard in 1953, Porter inherited the positions of art department chairman and director of the Howard University Gallery of Art. Although the administrative tasks associated with these jobs ate into his time for painting and research, Porter adjusted by regularly working well into the night. Porter made another trip to Europe in 1955, this time as a fellow of the Belgium-American Art Seminar. In Belgium, he followed up on his earlier research into Flemish and Dutch art of the 16th, 17th, and 18th centuries.

In 1963 the Washington, D.C., Evening Star newspaper awarded Porter a grant to travel to West Africa and Egypt, where he was to research the art and architecture of those regions for his next book.

In 1966 Porter was one of 25 artists honored for outstanding achievement in the arts by President Lyndon B. Johnson as part of the National Gallery of Art’s 25th anniversary celebration. The following year, Porter organized an exhibition as part of Howard’s centennial festivities. Entitled “Ten Afro-American Artists of the Nineteenth Century,” the exhibition included works by Edmonia Lewis, Henry Ossawa Tanner, Duncanson, and others whose artistic gifts had been ignored largely because of their race.

Toward the end of the 1960s, Porter was diagnosed as having cancer, and he became seriously ill. His illness did not stop him from traveling to Africa once more, this time to chair a conference in Rhodesia on Zimbabwean culture. His health continued to deteriorate, however, and he died just a week after chairing a conference in the United States on African American artists.

In 1992 the Howard University Gallery of Art mounted an exhibition of Porter’s work. The retrospective, “James A. Porter, Artist and Art Historian: The Memory of the Legacy,” emphasized Porter’s unique ability to carry out the dual roles of artist and scholar, each with commitment and excellence.