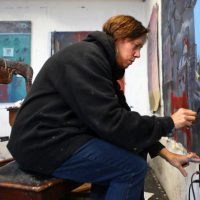 Jane Ryan was born in Concord, New Hampshire, the fifth of seven children. Her father was a local housepainter who kept an easel rigged up in the back of his truck so he could paint landscapes in spare moments.

Ryan began to explore her own interests as an artist after twenty years as a psychotherapist in rural Maine. She graduated from Emmanuel College in Boston in 1972 and got a master’s in counseling in 1977. She took a drawing class in 1996, where she quickly found herself “desperate for color.” Shortly thereafter, she began her life as a full-time artist.

Ryan sees all organic form as landscape. Her work reflects her deep commitment to a rural life and landscape that seems to be disappearing. Her most recent works are paintings of places that she pastelled years ago, with a renewed focus on the emotional dynamic between geometry and color.

Ryan’s work has been shown at the Chase Hill Gallery in Kennebunkport, Maine (juried exhibit, 2003); the Falmouth Public Library in 1998 and 2004 and The Fogg Gallery, Vinalhaven Maine, as part of a group show with Seven Women Painting in 2005. She is represented by the McGowan Fine Art in Concord, New Hampshire and Leighton Gallery in Blue Hill, Maine.