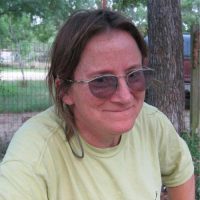 Janet Eager Krueger is an artist known for her large-scale oil paintings of South Texas ranching life. She is an associate professor of art at Texas A&M International University in Laredo and lives on a ranch in nearby Encinal, Texas, in the southwestern corner of La Salle County just north of the Webb County line. In April 2007, Krueger was designated by the Texas Commission on the Arts as “Texas State Two-Dimensional Artist of the Year” for 2008. State Representative Harvey Hilderbran of Kerrville (District 53), chairman of the House Committee on Culture, Recreation, and Tourism, said that such artists as Krueger “demonstrate the essence [sic] of what art in Texas is all about. The work of these artists, and others like them, ensures that art and culture thrives in our great state and we are pleased to honor these talented men and women with this recognition.”
Krueger’s work is contained in private and corporate collections, including, the Kronkosky Charitable Foundation, Laredo National Bank, TAMIUI, the University of Texas at San Antonio, Valero Energy and the San Antonio Spurs, a professional basketball team. Her work was also shown in the Austin office of First Lady Laura Bush, when U.S. President George W. Bush was governor of Texas. Art consultant Alice Carrington Foultz told the Laredo Morning Times that Krueger captures “the issue of the border area . . . in a sensitive [sic] way.” One of her paintings depicts milk cartons discarded onto a field by illegal immigrants. Foultz said that Krueger “gives such a pure and honest portrayal of the South Texas landscape, and she honors livestock with such majesty and respect.”
Krueger’s mother Betty was herself a watercolors artist. Her paternal aunt, Grace Eager, was a zoological painter in the 1940s. Krueger graduated from Alamo Heights High School in San Antonio. In 1975, she received a Bachelor of Fine Arts in art history from the University of Texas at Austin. She then became the artist-in-residence for the College Station school district and then the slide curator for the architecture department at Texas A&M University in College Station.
In 1980, she moved to Encinal, population 650, after she married her high school classmate, George C. Krueger (born 1951).[1] The couple has two grown children, Will and Kate. For a time, Krueger devoted herself to ranch life and worked for a large-animal veterinarian in San Antonio. Thereafter, Krueger became an art instructor at Laredo Community College. She then pursued her Master of Fine Arts from the University of Texas at San Antonio in the late 1990s. She worked under the art professor and landscape artist Charles Field. In time, she joined the TAMIU faculty.
Krueger established a youth arts program known as Hecho en Encinal (“Made in Encinal”). The program receives $250,000 in funding from the city of Encinal. On July 22, 2008, the Encinal City Council rejected the pursuit of a $511,000 grant, originally awarded in 2005 from the Rural Development Division of the United States Department of Agriculture, which would have provided broadband Internet service to the community. Krueger called the council decision “tragic” because the grant “would have been for the elevation of young people in this community. It’s sad. [The city council] won’t get another chance like this.” The council declined the grant because of long-range costs involved after the initial two-year period. Mayor Sylvano Sanchez said that the community would instead concentrate on street paving.
Krueger began her art with oil paintings and worked from photographs of the ranch. She then moved to drawing and sketching with color pencils. Her work with color pencils is said to stand out from that of others in the same medium. She has been frequently displayed at the Hunt Gallery in San Antonio.
Krueger’s art is rooted in the South Texas Brush Country, known for its usually scorching summer temperatures. Her imagery includes the small towns and the border culture as well as the people and animals of the region as they encounter drought and rugged terrain. Her art resonates with love, humor, and a sense of mission.
www.en.wikipedia.org/wiki/Janet_Krueger