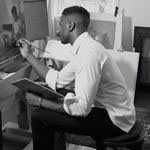 American artist Jas Knight’s quiet portraits are studies in cultural history as well as in the tradition of portraiture itself. His portraits are suffused with a sense of dignity that recalls the formal portraiture of the seventeenth century, and his use of light and shadow recalls Baroque painting. This is no accident, as Knight admits that his work is inspired by artists from across history. But Knight’s work is ultimately devoted to contemporary American culture.

“My work explores the relationship of people to the environments they have created for themselves to live in and the values that they place on objects,” Knight says. What sounds simple and straightforward is in fact immensely poignant. He constructs scenes of complex beauty and depth to communicate forthrightly. As he explains, “It is my goal to speak as plainly as possible to people through these paintings. I hope my work to be like the last traces of the sun’s wrath on the clouds of evening, a thing seen and appreciated by the child and the one possessed of a hoary head alike.”

Knight is a Bloomfield, CT native. He pursued training in art at the Philadelphia Academy of the Fine Arts and received his BFA from the University of Arts. He moved to NY in 2007 to work as a painter for Jeff Koons and left the job in 2011 to create paintings for a solo exhibition at Sande Webster gallery in the Spring of 2012. In 2011 Sande Webster gallery, after more than four decades of doing business, closed. Knight currently lives in NY and has since been working on his paintings full time.