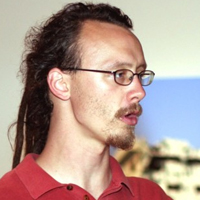 Jason Hughes is an interdisciplinary artist with an emphasis on sculpture, drawing, and print media. For the last several years Hughes has focused his work on the history of American economic power and its influence over cultural representation in the United States. His creative practice is quite diverse including textiles, collages, and cast sculptures from shredded currency; a series of large scale prints that are ornate abstract composites of money; and sculptural objects from appropriated street barricades used for crowd control. His process and product address issues of high and low craft, production and trade, as well as shifts in representation and the perception of value.

Hughes received his MFA in Intermedia and Digital Art from the University of Maryland Baltimore County in 2015. He received a BFA in sculpture from the Maryland Institute College of Art in 2004 and attended the acclaimed AICAD New York Studio Program during the fall of 2003. In 2014, his work was selected for an exhibition at Marianne Boskey Gallery curated by Mera Rubell as well as the exhibition Washington Color Abstraction at the Gabarron Foundation Carriage House Center for the Arts curated by Donald Kuspit. His artwork has been featured in the New York Times, New American Paintings, and Art in America. He is currently based in Brooklyn, New York and has exhibited his work both nationally and internationally since 2005. His work can be found in collections at the International Monetary Fund, the Federal Reserve Bank of New York, the Art and Embassies Program, and Capital One Bank to name a few.