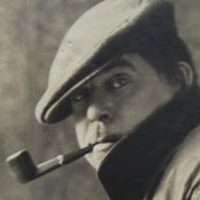 Jay Hall Connaway was born in Indiana in 1893, and after periodically studying at the Art Institute of Indianapolis and at the Art Students League with William Merritt Chase, Connaway traveled widely throughout the United States. He was sent to France during World War I, and stayed on after the war to study in Paris at the Julian Academy and at L’Ecole des Beaux Arts through 1921.

Returning to the US and encouraged by the artists Paul Dougherty, Emil Carlsen, and Frederick Waugh, Jay Hall Connaway spent 1922-1925 painting at Head Harbor Island, ME focusing his artwork on depicting the various moods and subtleties of the sea. After many successful one-man shows in New York City, Connaway was sponsored by the Macbeth Gallery, NYC to once again return to France to paint scenes of Brittany and Paris from 1929-1931.

Following these additional studies, Connaway returned back to the US only to find the country in the midst of the Depression. At this time he moved to Monhegan Island with his family where he founded Connaway’s Monhegan School of Art. Connaway loved Monhegan Island and was inspired by the island’s changeable weather and the humbling nature of the deep seas. He continued to develop his confidence as a painter. Ultimately, art critics began calling Jay Hall Connaway “the master sea painter of his generation.” The Connaway family moved to Dorset, Vermont in 1947 where he painted and taught until the close of his life.