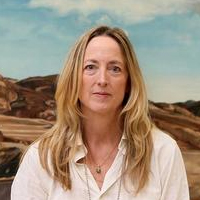 Jean Lowe received her B.A. from UC Berkeley in 1983 and her M.F.A. from UC San Diego in 1988. From 1992 to 2008 she was a lecturer at UC San Diego and in 2001 at San Diego State University. She was also a member of the visiting faculty at Skowhegan School of Painting and Sculpture in 2003 and gave an artist lecture as part of Art Talks at the Art Institute of Boston at Lesley University. She has received numerous awards and grants including 2 WESTAF/NEA Regional Fellowships (sculpture); a Pollock-Krasner Foundation Grant; a California Art Council grant; the Alberta duPont Bonsal Foundation Purchase Award; CalArts/Alpert Ucross Residency Prize; and The SD Art Prize cash grant presented by San Diego Visual Arts Network.