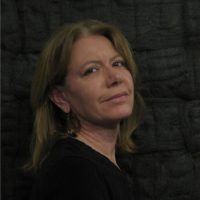 Bedgood creates multimedia works that reflect her questioning of the duality of human nature. She received a BFA in painting and art history from Louisiana State University in Baton Rouge, and MFA from the University of Texas at Austin, mixed media sculpture and art history. Grants include two Visiting Artist Residencies at the American Academy in Rome (May 2005, April 2009) and a Residency at the Rockefeller Foundation’s Conference Center in Bellagio, Italy (October 2000). Other grants include New Forms Regional Initiatives Grant (funded by the Rockefeller and Andy Warhol Foundation for the Visual Arts and National Endowment for the Arts (1993-1995); a Mid-America Arts Alliance / National Endowment for the Arts Award in Sculpture (1989), and an Art Matters Inc. Grant (1989). She has been a fellow at the MacDowell Colony (1988) and the Virginia Center for the Creative Arts (1994).

Bedgood has exhibited work at the Austin Museum of Art, San Antonio Museum of Art, Women & Their Work Gallery, Lawndale, as well as alternative spaces in the U.S. Reviews include the New York Times, The New Art Examiner, High Performance, Sculpture, Art Lies, CNN on line, NPR, to list a few.

Bedgood has a history of involvement with art in the public realm, with work included in The Art of Placemaking. She engaged the public with “Contagion: Measles, Influenza, Smallpox,” soap cast in the form of communicable diseases, which was distributed in rest rooms at the University of Texas El Paso as part of the Visiting Artist Program. Her work for the City of Austin includes “Texas~ Mythology ~ Reality” (Austin Bergstrom International Airport), “Botanical Paintings” (Austin Convention Center), “Community Quilt Mosaics” with Steve Wiman (S. Austin Senior Activity Center), “Zilker Park Playscape Designs” (Austin). Currently she is an Art Consultant for GS&C Architects for the City of Austin Waller Creek Project, and working on “Currency” for Second Street Austin, “Charm Bracelet Screen” for the Northwest Recreation Center Austin, and “Summer Creek Masterplan” in Fort Worth. She has designed two memorials: “evolution” for the University of Texas Tower Garden, and “Milagro Doors” for the Missionary Oblates of Mary Immaculate San Antonio. Bedgood served as Chair of and Panelist for the Art in Public Places Program for the City of Austin.