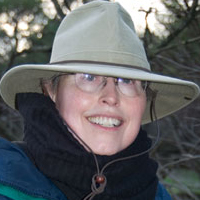 Painter, photographer, adventurer and naturalist – these are the words that describe the artist J.J. L’Heureux. Ms. L’Heureux made her first trip to Antarctica in 2000 where she collected digital images of ice and snow for a white-on-white color field series of “landscape” paintings. During this expedition she became fascinated by the wildlife and pristine environment she discovered there. Penguins, all types of seals, and the unique varieties of birdlife found in the Southern Ocean and its environs became living models for her in the wind-swept setting of the vast, icy wilderness that is Antarctica. Since that initial trip, Ms. L’Heureux has returned to Antarctica every season where she continues to collect images for her extensive digital database.

Ms L’Heureux revisited the Ross Sea again in 2013 and 2014 to continue her photographing of Admiral Robert Scott and Sir Ernest Shackleton’s Cape Royds Huts and the wildlife.

In January 2011, Ms. L’Heureux undertook her 11th expedition to the Ross Sea, Antarctica, with the Scott Expedition named after Admiral Robert Scott, the Antarctica explorer who died in 1912 while returning from his historic trek to the South Pole.

In June 2012, Ms L’Heureux participated on a joint venture with the London Zoo in an on-going attempt to preserve a highly endangered, and barely known, Spoon-billed Sandpiper in the Kamchatka Region of Russia.

She has traveled as a passenger on Russian icebreakers, as an art and photography lecturer on adventure cruises, and on her own in a small motor sailor, the Golden Fleece. She also participated with The South African Penguin Study on Robben Island, South Africa, part of a project with The Southern African Foundation for the Conservation of Coastal Birds (SANCCOB).

Ms. L’Heureux’ travels have resulted in two books. The photographs of penguins in the Good Day Book came from ten different expeditions that she made to Antarctica. Faces from the Southern Ocean, Ms. L’Heureux’ most recent book conveys the sense of intimacy she experienced when she first saw the ‘faces’ of the amazing wildlife that inhabit the Antarctica continent. She was captivated by faces such as those of the Wandering Albatross, the Elephant Seal, the Emperor and Royal Penguins.