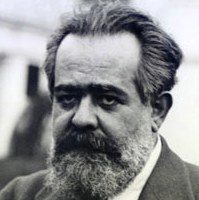 Jo Davidson (March 30, 1883 – January 2, 1952) was an American sculptor of Russian-Jewish descent. Although he specialized in realistic, intense portrait busts, Davidson did not require his subjects to formally pose for him; rather, he observed and spoke with them. He worked primarily with clay, while the final products were typically cast in terra-cotta, marble and bronze.
Born in New York City, Davidson worked in the atelier of Hermon Atkins MacNeil before moving to Paris to study sculpture at the Ecole des Beaux-Arts in 1907. After returning to the United States, he was befriended by Gertrude Vanderbilt Whitney, who purchased some of Davidson’s work.
In 1911 Davidson secured his first solo gallery shows. He was one of a dozen sculptors invited to compete in the Pioneer Woman statue competition in 1927, which he failed to win. In 1934 he won the National Academy of Design’s Maynard Prize, and in 1947 the American Academy of Arts and Letters hosted a retrospective featuring nearly 200 of his works. He was one of 250 sculptors who exhibited in the 3rd Sculpture International held at the Philadelphia Museum of Art in the summer of 1949.
Among Davidson’s commissions are a design for a United States War Industries badge, a collection of pieces for the Government of France to commemorate the first victory of the Troupes de Marine and bronze busts of the leaders of the Allies. His portraits of world leaders and celebrated personalities gained him international acclaim, and included such luminaries as:
Some of Davidson’s work is in the National Gallery of Art.
He also designed a statue of Henry D. Thoreau, the author of the book Walden. The statue is located at Walden Pond State Reservation in Concord, Massachusetts.
In 2006, The Smithsonian Institution’s National Portrait Gallery opened a permanent exhibition, “Jo Davidson: Biographer in Bronze”, showcasing fourteen Davidson works in terracotta and bronze, including portraits of Gertrude Stein and Lincoln Steffens.
Davidson was chairman of the Independent Citizens Committee of Artists, Scientists, and Professional (ICCASP) a leftist-liberal group which supported the policies of President Franklin Roosevelt and his re-election. In 1946 this group merged with the National Citizens Political Action Committee (NCPAC) to become the Progressive Citizens of America (PCA) of which Davidson became co-chairman (the other chairman being Dr. Frank Kingdon). PCA struggled against the onset of the Cold War and fought for racial equality, economic justice and civil liberties. Important segments of the PCA became the base for Henry Wallace’s candidacy for U.S. President in 1948 on the Progressive Party ticket.