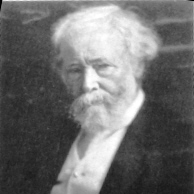 John Joseph Enneking (1841-1911) was orphaned at the age of 16. He left his father’s farm to live with an aunt. His first art lessons, taken at Mount St. Mary’s College in Cincinnati, were interrupted when he enlisted in the Union Army during the Civil War. Severely wounded in action and discharged from service, Enneking eventually made his way to Boston to continue art lessons. For a time he studied industrial drawing and lithography, but dropped it when his eyes weakened. Tinsmithing proved more profitable, and while he flourished at this occupation he married and built a large home in Hyde Park, MA. He became a partner in a wholesale establishment that soon after failed, and again Enneking returned to art. His efforts finally met success, and by the time he sailed for Europe in 1872, his career as an artist had been assured. Enneking studied with Bonnat and Daubigny in Paris from 1873 to 1876 and with Lehr in Munich. After studying in Europe, he returned to Boston in 1876 and opened a studio. His later style became much more impressionistic, losing much of the grandeur of his earlier European teachers.
Enneking was a member of the Twentieth Century Club, Pudding Stone Club, Hyde Park Historical Society, Boston Art Club, Paint and Clay Club of Boston, and the Boston Guild of Artists.
He exhibited at the following: Massachusetts Charitable Mechanics Association, Boston (medals); Paris Expo, 1900 (prize); Pan-Am Expo in Buffalo, 1901 (medal); Pan-Pacific Expo in San Francisco, 1915 (gold). His work has been preserved at the Worcester Museum and the Boston Museum of Fine Arts.
Enneking made several painting trips to the White Mountains and became the artist-in-residence at Wilson Cottages and, later, the Iron Mountain House.
His last known address was Hyde Park, Massachusetts.