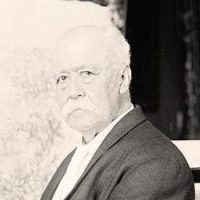 John Ross Key was the grandson of Francis Scott Key, author of the patriotic song The Star Spangled Banner. He was born in Hagerstown, Maryland in 1832 and studied art in Munich and Paris. He worked in a number of American cities including Boston where he showed over 100 works in 1877. Critics praised his work as “firm and masterly, strong and graceful.”

Key began his career as a draftsman for the United States Coast and Geodetic Survey. He served with the Federal Corp of Engineers in Charleston, South Carolina and recorded the siege of the Confederate city in 1863.

After the war, Key lived in Northern California for a few years. He resided in San Francisco and painted many landscapes including popular subjects in the Sierra Nevadas, as well as the Golden Gate Bridge and Point Lobos. Many of his paintings were made into chromolithographs by Louis Prang in the 1870’s. His White Mountain paintings were often panoramic views. He painted often from north of the Presidentials in the Jefferson area, but he also painted in North Conway area.