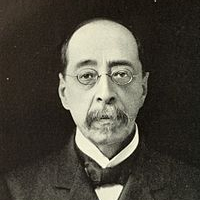 John La Farge is best known for his innovations in stained glass design during the late 19th century, but he also worked in a variety of other media throughout his career. Born in New York in 1835, LaFarge received his first artistic training at the age of six and learned to use watercolors while still in grammar school. At the age of 24, after studying law for a time, La Farge went to Paris to study painting under Thomas Couture. While abroad, he discovered the work of the English Pre-Raphaelite painters Gabriel Dante Rossetti and John Everett Millais, whose idealized scenes and moralizing subjects he admired. La Farge returned to the United States in 1859 and settled in Newport, Rhode Island to begin his career as an artist. There, La Farge studied with American romantic artist William Morris Hunt.

An artist of broad cultural interests, La Farge traveled widely, and every visit abroad became an occasion for artistic inspiration. In 1876 LaFarge was commissioned to design the interior of Trinity Church in Boston, Massachusetts. These murals and stained glass designs were greatly admired, leading to a number of important commissions for public buildings, including St. Thomas’s Church, New York (1878), the Church of the Ascension, New York (1888), as well as private commissions for prominent patrons, for example, Cornelius Vanderbilt. La Farge also worked in watercolor, using this medium to develop sketches for his murals and stained glass compositions. Among La Farge’s best-known watercolor paintings are those made during his travels, particularly those during his visit to the South Seas in 1890–1891. These watercolors were produced en plein air (outdoors) and are characterized by their exotic subjects, spontaneous brushwork, and delicately defined figures. Never completely liberating his artistic style from architecture, La Farge’s watercolor compositions are often frieze shaped and contain bold, ‘jewel-like’ colors, bringing to mind his stained glass images. The Phillips Collection’s work, Chiefs and Performers in Fiji (1891) is a typical example of La Farge’s South Seas watercolor painting.

La Farge was a close friend of renowned author Henry James, artist Winslow Homer, and celebrated American historian Henry Adams. Within this august circle, La Farge occupied a special place, writing eight books and numerous essays on art in order to establish a sound tradition of the fine arts in the United States. His books, Considerations on Painting (1895), An Artist’s Letters from Japan (1897), and The Higher Life in Art (1908) are distinguished for their urbane and cultivated language and aesthetic theories, similar to those espoused by the artist James A. M. Whistler. LaFarge continued to produce art, mostly decorative stained glass and murals, write, and travel until his death in 1910.